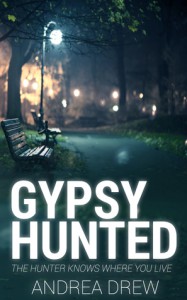 I received a copy of Gypsy Hunted via Netgalley in return for an honest review.

I was intrigued by the premise of this book but unfortunately I had to give up and add it to my DNF pile.

There is no flow to the writing and it's in bad need of proof reading and editing by someone who knows what they are doing. The grammar and punctuation, or lack of in places, make the sentences choppy in parts and too long in others. It was very frustrating as many sentences didn't make sense at all and it's virtually impossible to follow the storyline. There was also a lot of repetitive use of words too close together in one sentence, and starting multiple consecutive sentences with the same word.

The lack of punctuation created lots of the 'Let's eat Grandma!' effect. I had to reread sentences so many times just to try and understand what was being said or who was doing what.

A few examples of some of the problems mentioned above...

1. I spoke through flattened lips, past my neck in which a vein was pulsing and engorged.

2. Most likely here the doctors and nurse would be of goodwill, although not always.

3. I glanced at the redhead curling my fingers to scrape my hair back.

4. Her dark hair was just the same as it had always been, her hair part poking through amongst the mess her mouth set in a grimace, accepting all that was barely tolerable.

5. Long, straw-colored hair fell across her face, her wrists were tied, and through her mouth, gagged with duct tape, she was struggling to make some semblance of noise.

6. “Hey, Gyp, saw you get a business card. Geez doesn’t take you long, girl. Hope you wore matching undies tonight.” Rita swigged down half a glass of wine in one gulp. Her narrow face was mocking me. She rolled her eyes as she set her wine glass on the shelf, and then pushed her hands out to warm them at the open fire. “Piss off, Rita, jealousy makes you ugly.” I lowered my chin to look at her, my feet apart in a fighting stance. Then, letting it go, I turned to Chloe, who was struggling not to show her delight."

I hate to give up on a book but unfortunately, with all the problems I had with this one, I had to admit defeat. I don't understand the 5 star reviews this book has, after reading the book I can't justify their ratings, they really aren't doing the author any favours by not being honest about the problems in the book.