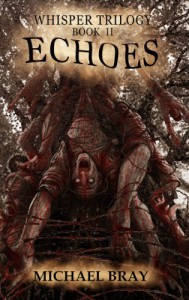 Another great book in the Whispers trilogy, roll on book three!!

Echoes picks up seven years after book one and a hotel has been built on the area of Hope House. A paranormal team are going in to investigate and the previous tenants of the house have returned for the event, although not really having wanted to. Will everyone be safe and things go as planned?

There are a few storylines running together in this one, each with it's own characters and it works really well. The individual storylines really build the tension up on several different fronts and brings them all together for a great finale. One that will have you itching to get your hands on book three to see what happens next.

There isn't as much mystery in this one as in the first one but the tension really picks up in Echoes as previous characters make an appearance and are determined to have their revenge and to try claim what they didn't get in book one. You are swept along with the story, watching the characters take steps that you just know are going to have dire consequences later on.

I'm eager to get my hands on the last instalment to see what's coming next!