See You in Hell by David Thome 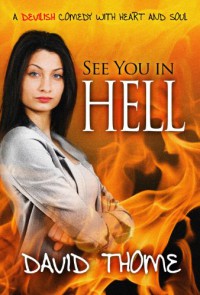 I received a free copy of See You in Hell in return for an honest review.

Lucinda is a hard boss to work for, she's heartless and expects 100% from everyone, 100% of the time. But times are tough and Lucinda's company isn't making the profit she desires, lay-offs are being made and a disgruntled employee turns on Lucinda. Picture if you will, a man with a gun and nothing to lose, a woman who thinks she has complete control, and you have Hell, literally. You've heard I'm sure, that Hell hath no fury like a woman scorned. Lucinda is furious and upon her arrival in Hell, decides that she is going to be the one in control.

See You in Hell is full of satire, punchy one liners, tongue in cheek humour and was a fun read. Lucinda is a bit of a bitch but she grows on you and you have to admire her wit. I enjoyed the way that the author approached the whole religion and heaven and hell aspect of the story. It's a serious subject for most and it was a refreshing take on it. The story is narrated in the voice of Satan and he was a lot of fun. He was witty, smart and charming, I liked him, don't judge me!

The ending was a bit predictable but it was an interesting and fun read, one that I would recommend.