Altar of Reality by Mara Valderran 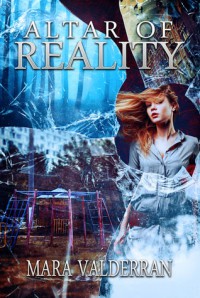 I received a free copy of Altar of Reality from the publisher in return for an honest review.

When Madeline suffers her first grand mal seizure she wakes up to find herself in an alternate reality surrounded by strangers with familiar faces. Madeline has no memory of anything that's happened in this new reality, chaos surrounds her and her life is in danger. Is it a dream? Which reality does she belong to, can she solve what's happening and get home to the where she belongs?

I liked Altar of Reality enough to finish it and it held my attention for the most part, but I found a few things really started to niggle me. The romance in the book was frustrating. I understand they are just teenagers but I wanted to give Madeline a kick up the backside and have her see some sense. I'm not a fan of love triangles and because of the alternate realities there was kind of two going on in this one.

The plot was slightly different from other books because of the way that Madeline switched between realities, but I don't feel it stood out any more than the others I have read. To be honest, it's less than a week since I finished the book and if I didn't have my notes to remind me, I would be struggling to even remember the story in order to type this review.

One thing I really hate is cliffhangers and there's a huge cliffhanger at the end of this one. I get that it's a series but there is no resolution to the end of this book at all, it just leaves you hanging waiting for the next book and that really puts me off when it comes to reading a series.