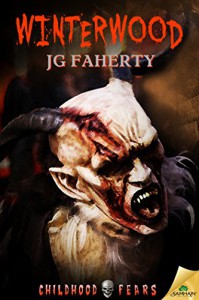 I received a free copy of Winterwood from the publisher in return for an honest review.

Winterwood: Take a bunch of Grimms fairytale characters, throw them together, add an elf who seems to be channelling yoda, two kidnapped twin boys, and a Grampa who is able to kick ass (in-between taking his angina tablets), and put it all into a Christmas horror story that's released for sale in May...

It's all a bit far fetched. Sure it's full of fairy tale characters and it's fiction, but you can only suspend belief for so long before you start shaking your head at the ridiculousness of it all. Had it been a children's book I could see it working better, but it's a horror book aimed at (I assume by the language) an older audience. I found the whole thing rather silly for a horror book to be honest.

It got that I didn't want to read on, I honestly didn't care about the outcome of it all. I wasn't feeling it. I just kept finding myself thinking that it was getting more ridiculous as the story went on. Also, why release it in May rather than around Christmas time which would make much more sense?