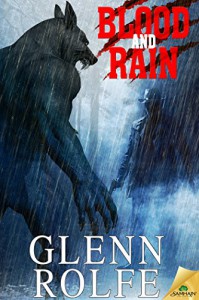 I received a free copy of Blood and Rain from the publisher in return for an honest review.

Blood and Rain has a great atmosphere and stand out character development. I have read a few of Glenn's books now and characterisation was something that I felt was lacking in his previous works but he has really stepped up to the mark with this one. The characters in Blood and Rain are well fleshed out and likeable, excluding the baddies but then we're not supposed to like them, and I quickly found myself eager to turn the pages to find out what was in store for them next.

The pacing is great and it's full of horror and tension, with plenty of scenes that will have you cringing as you read. It has a very dark atmosphere at times and the forest scenes were done particularly well. I could visualise it easily... dark, rainy, sounds coming from every direction, something lurking close by ready to jump out any second. It really draws you in and keeps you on edge.

This is werewolves as they should be. They're not cute and fluffy, they don't remove their shirt every scene or stick their furry noses in unmentionable places. These are proper werewolves. They're scary, they're mean, they're violent and they're behind you! Only kidding. No, really... they're behind you...