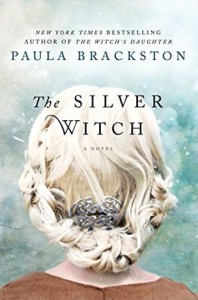 I received a free copy of The Silver Witch from the publisher in return for an honest review.

They say you should never judge a book by it's cover. But that cover, I just couldn't resist it, it's gorgeous. I'm really glad that I took the risk.

There are two main female characters in the story, both in different timelines. I have to stay I enjoyed the earlier timeline much more than the present day one.

Tilda's story, the present day one, was a very slow burner, it wasn't moving fast enough and really didn't pick up until the very end when things got interesting. There was a lot missing that would have perhaps drawn me to the character more. Considering the link between the two timelines (trying not to give spoilers) she was rather singular and I would have liked to have known her better, understood the who and why of her own history in relation to the storyline. I didn't feel the connection and she just seemed to take it for granted without asking or researching the specific link. I felt like I was told her side of the story rather than being shown.

The earlier timeline really captured my interest and was by the far the better one in my opinion. I could visualise it better and I felt like I knew Seren, she was a much stronger character and had a lot more substance than Tilda. In regards to the magic side of it, Seren's story made much more sense and was a lot more believable than Tilda's. Tilda's magic just seemed out of the blue which I struggled with.

All in all it was a decent read and I'm glad I took the chance after having not enjoyed the previous book I had tried from this author.