Such A Clever Deception (Stolen Tears, #0.5) by Cortney Pearson 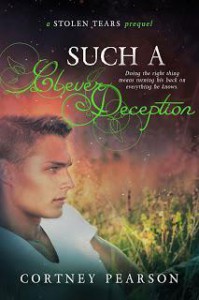 I received a free copy of Such A Clever Deception from the publisher in return for an honest review.

Such A Clever Deception is a prequel to the Stolen Tears series and introduces a bit of back story to one of the characters from the series. I have read the first book of The Stolen Tears series and I think because I know the character from that book that I could appreciate this look behind the scenes a little bit more than if I was coming to it without any other knowledge of the story.

I don't feel that this short really gives a great example of the depth of characters, world building and writing style of the author as much as it could. I really do enjoy the imagination and the way this author approaches a story and I think that Such A Clever Deception was a little bit too short to really show off her talent.