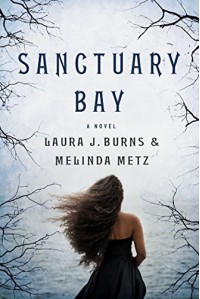 I received a free copy of Sanctuary Bay from the publisher in return for an honest review.

What stood out the most for me in Sanctuary Bay was the setting, the island created a feeling of isolation and helplessness that made the storyline more interesting. The characters however were a bit of a disappointment, I found them to be rather cliche as each filled a stereotypical role: rich girl, poor girl, popular girl, bad boy, etc. There was also the cliche love triangle that seems overly popular in young adult books which blends this book into almost every other young adult book out there for me. Same framework, different story.

The story itself was interesting and there was enough twists to keep me reading but it lacked depth and explanation. There was too much of a focus on the characters instead of what was going on behind the scenes at the school, which was the best part of the book in my opinion.

The pacing was inconsistent, it went from slow to perfect and then into overdrive. The book started out well, I was intrigued and interested after the initial scene but once other characters started to come into the story it slowed down quite a bit. The pace started to pick up around a third of the way in and stayed that way for almost the rest of the book until the ending which felt very rushed. The pacing in the last section of the book was too fast, like perhaps it had to be squeezed into a limited amount of pages, it didn't work for me.

All in all it wasn't a bad read but it wasn't a great read either. There isn't much in Sanctuary Bay that makes it stand out from other young adult books, it's built on the same framework as many others out there: stereotypical characters, girl meets boy, girl meets another boy, which boy will she choose.