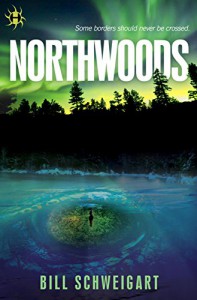 I received a free copy of Northwoods from the publisher in return for an honest review.

Had I written this review right after finishing Northwoods it would have been higher rated but I have found, after contemplating on it for a bit, certain things which didn't really jump out at me at the time. I did enjoy Northwoods while reading but on writing this review I have come to realise that it was more of an OK read than the great read it seemed to be.

At times I felt there was too much going on and that the characters spent more time apart than they did together. As a result a lot of the action was happening at the same time, this I feel caused a lack in the overall building up of the tension and fear.

I also had trouble with the believability aspect at times. Take for example the opening scene of the book. The area is monitored by sensors and drones and although the sensors were triggered they didn't pick up on the people that were in the vicinity. Surely they would pick up on these people, that is what they are there for after all. Also, the opening scene gets totally forgotten about as the story progresses and the item found in this scene is actually an important item to the storyline. What happened? How did it get there? Where did it come from? Why did no one ask these questions or look into it more?

On a more positive note. I enjoy when an author includes lore or legend in their storylines, I find it fascinating and it added a whole new level to a story for me. The scene setting was done well and the interaction between the characters, when they were all together, were well written. I can't say that I found all the characters likeable or relatable but I did enjoy the character of Alex Standingcloud more than the others. I found Lydnsay to be, as time went on, rather annoying.

Overall it was an OK read. Northwoods was my first by this author and I would read more but I would have to be drawn into the story way more than I was with this one before I would pick up a third.