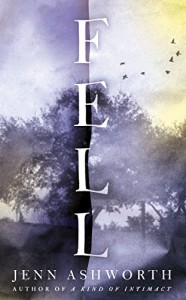 I received a free copy of Fell from the publisher in return for an honest review.

Fell is beautifully written and was a pleasure to read. Jenn Ashworth creates many haunting, beautiful and vivid pictures and has a wonderful way with words. I particularly loved how the house was portrayed, the descriptions of the decaying house really brought the place to life. But, I struggled to connect to her characters. The characters were individual enough but I couldn't picture them, I couldn't relate to them or get to know them on the level that I felt was needed. They were, literally, characters on the page, they didn't have enough substance or colour to make them stand out.

The book is narrated by the ghosts of the main characters parents and although I did enjoy them taking me through their lives, I found them rather flat and emotionless at times. The distance between them and what they were watching felt huge, like they weren't a part of what they were reliving, I wanted more emotion from them. It was like they were watching someone else's lives, reliving someone else's memories, not their own.

I am left with many questions. Every page read as though it was floating on the surface of something deeper. The book doesn't tell a full story, nor does it give me enough to fill in the gaps. Who is Tim really? What exactly is this strange power he has? What happened to Annette between then and now to make her the way she is? What was the fortune teller hinting at with Annette and her gifts? Is Annette's gift part of what drew her parents back? What was it that Tim saw in Annette?

I kept reading on expecting to learn more, to have answers to these questions. I set my hopes on there being some big finale that rounded everything off in the end, but the story just kind of fizzled out.

Fell wasn't an awful read, the writing alone was worth the time invested but the story itself felt superficial. Rather than having experienced a journey along with the characters, I feel instead that I was sat on the sidelines, watching their life story through a window.