Reading progress update: I've read 40 out of 416 pages of Horrorology 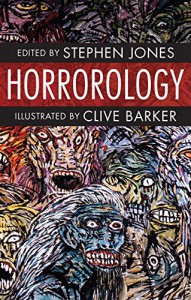 I'll do my usual and re-post this as an update, rating each short individually, then put it all into a review when I've finished the collection. I really hope it picks up because the first two are rather disappointing.

In the Library of the Damned, hidden away amongst that vast depository of ancient wisdom, there exists a certain bookcase where the most decadent, the most blasphemous of tomes sit upon a dusty shelf.

And amongst those titles - that should never be named - there is one volume that is the most terrible, the most hideous of them all.That book is the Lexicon of Fear.

But, long ago, some of its pages were ripped from the binding and spirited away by a lowly student of the ancient science of Horrorology, who was determined the secrets contained therein would one day be shared with the world.

And now that day has come. These are the words that comprise the very language of horror itself, and the tales they tell are not for the fainthearted. But be warned: once you have read them, there is no turning back. Soon, you too will know the true meanings of fear...

01 - Accursed by Robert Shearman - When you believe that you have been given or inherited special powers which can be used to cause harm to others. Such as circus clowns... - 2 Stars.

Not a fan of this one. It drags and I'm not really sure what the author was trying to say. There's obviously some underlying message but whatever it was I wasn't getting it at all.

02 - Afraid by Clive Barker - When you realise that the person you love is not what you thought they were. In fact, they may not even be a person at all... - 1 Star.

What? Three and a bit pages of non-story. That was so disappointing.