The Queen Of The Tearling 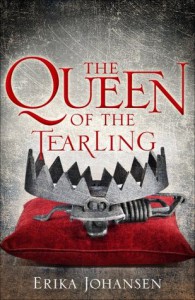 After receiving an ARC of The Queen of the Tearling, I went on to have a peek at some reviews before reading, this is something I usually avoid as I like to go into a book with an open mind. What I found was a lot of people saying how bad this book was and picking the story apart, I'm glad that despite seeing these reviews that I decided to go ahead and read it anyway.

I thoroughly enjoyed this story, sure there was one or two inconsistencies but it was nothing to rage over or took anything away from the story itself. I found it refreshing that the heroine in this story was a regular girl with insecurities like everyone else and not your cliche stunning beauty that has all the men in her kingdom falling at her feet or on their swords for her.

The only thing that bothered me was that supposedly this story is set years in our future but it reads like a medieval fantasy. There was little back story as to what happened to get them where they are and aside from the odd mention of Rowling and Tolkein when perusing the old books in their library you would never know it was set in the future as there is a distinct lack of any technology.

I would recommend this one to anyone who enjoys medieval fantasy, give it a try for yourself and go in with an open mind and ignore those negative reviews. I'm certainly glad that I did, I read this book in two sittings in less than 24 hours and I'll definately be looking out for the sequel.
Tweet