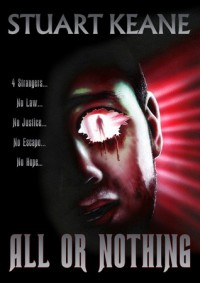 Having been looking forward to this since I read Stuart's novella The Customer is Always.., I couldn't wait to delve into this one.

How to do this one justice without giving spoilers, I don't know where to start. I have so much I want to say but I don't want to just throw it all at you without filtering out the spoilers.

First off, that cover, I love it! Had I not read the blurb and been intrigued by the premise of this book then the cover alone would have had me picking it up right away, it's eyecatching and just screams read me.

When I first read the blurb of this book I knew I wanted to make a point of reading it, the story intrigued me and sounded very much like a good scary movie. Like a cross between a reality TV prog and Saw, my imagination was running away with me at the possibilities.

I want to say I became engrossed in this book, but it was more than that, I became invested. I felt like I was in The Game, I was there with the The Choices in those rooms, with them through their journey, fighting the fight with them through all the twists and turns that took place. I watched them grow, I watched them turn from frightened individuals into people I was proud of, fighting to live, fighting to escape, struggling to survive and not giving up.

I was impressed with the growth of characters as the book went on, how they changed, how they evolved within the environment they were in. I even found myself mentally shouting at one, well at least I thought I was, till my son turned round and said what's going on who you telling to "Come on and bloody choose you moron" lol

From the minute I opened this one on my tablet I don't think I closed it once, I was constantly picking it up because I just had to know what was going to happen next. I had to resist on many occasions to have a peek at the bottom of the page, which to me is a sure sign of a good book. While reading the book, it played out like a movie in my head and I could picture all the scenes and characters clearly as they progressed through The Game.

I would highly recommend this one to anyone who is a fan of horror, thriller and suspense, perhaps even reality tv, I know there has to be some fans of that out there somewhere lol.